It has been a steady slide since Turner Gill left Buffalo for Kansas (that didn’t go so well).  When Gill was at the helm they were having success and it looked like they were a program on the rise in the MAC, now they are skimming the bottom as other programs have ascended.

This is a paycheck game to start the season.  The line on it is one of the biggest on the board so it should have your attention one way or the other.

The Bulls will be breaking in a new QB which is not ideal for a road game against one of the best defensive teams in the country.  Odds are more than one signal caller will play which is another less than ideal situation.  Running back Brandon Oliver might be the MAC’s best but will find it hard to get untracked against Georgia.  The challenge for Buffalo will be making any kind of a big play.  If they can than they might make it respectable.

This is one of the biggest numbers out there this week and for good reason.  The question marks for Buffalo are high and this team is unlikely to get keep it close for more than a quarter if that.  The best time to bet MAC squads is in conference play during those midweek classics.  Although not many of those are featuring Buffalo lately.  [soliloquy id=”82219″]

Things are really tough in the SEC but Georgia once again has the schedule and talent to make a run.  The only thing missing for the Bulldogs is that early out of conference signature win.  I’m sorry, but playing Buffalo and Florida Atlantic won’t cut it.  It won’t be easy but missing Alabama, LSU and Arkansas from the SEC West gives them a shot at a special season.  This game is really just a tuneup.

The only weakness that you can find with Georgia is in the running game.  With the dismissal of Isaiah Crowell there is a void but it is nice to be able to fill it with top recruits.  But all can be made better if you have the best QB in the league.  He may not be a top draft pick but Aaron Murray is doing what Matt Stafford never did as QB of the Dawgs.  On defense this squad has next level talent scattered across the field including the NCAA’s best pass rusher – Jarvis Jones.

Georgia hasn’t been this big a favourite since 2005 against Louisiana-Monroe (they didn’t cover a 38.5 number).  Last year they had two games with a 30+ point spread and went just 1-1 ATS creaming New Mexico State but coming up way short against Kentucky.  The talent is there and against a MAC foe you should be able to expect a drubbing.  Still not much value there. 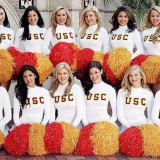